I have been postponing writing about this. The truth is I didn’t know how to start. Then today a friend had to say goodbye to their beloved pet of 12+ years. Her pain was unbearable and I could feel it. There is no easy way… so let’s just rip off the band-aid.

Coco was no stranger to the beach where he would say “Hi” to everybody.

When I rescued Coco the veterinary said he was between three and five years-old. I decided he was three years-old; that way in my mind he was going to stay with me for a long time. He was active, ran like the wind, and – oh – did he love the ocean. One time I was snorkeling maybe 25 feet off shore and suddenly he was next to me.

As years passed by my Coco started walking slower. My baby was not my baby anymore and Coco became an older dog. Suddenly he didn’t want to go into the ocean anymore. He weighed over 70 pounds (hey, he was a Labrador!) so putting him in the car got to be very difficult. So I bought those steps so he could get in the car and enjoy the rides… although he would not put his face out the window anymore. Coco would just lay still in the back of the car. I also noticed he would sleep most of the day, and then he started having accidents inside the house.

Finding “treasures” near the tennis courts.

What did I do? I don’t have a recipe of how to take care of older dogs – Coco was my first! I just tried my best to repay him for being “the best dog ever”. Coco basically helped me be a better rescuer; I don’t think I would have had so much success in training dogs to be better suitable for homes if it wasn’t for him. Now it was my turn to help him and to show him a lot of love. I also let him do whatever he wanted. “Oh, you want a piece of steak? There it is! Do you want to pee inside the house? Don’t worry, I will clean it. My first born? Here, you can have him!” Oh, and I kissed him. I kissed him a lot… Sometimes I think I over did it. But I knew the day was coming when I was not going to be able to kiss him anymore, so I didn’t care.

Coco passed away on August 12th, 2019. Sadly, I wasn’t there with him to say goodbye. I was out of Puerto Rico and I remember telling him “hold on until I come back.” But he had other plans. It seems like he did one final act of saving me from the pain of seeing his lifeless body. I get to remember him smiling and wagging his tail.

So this is my goodbye to you. Thank you for being such a wonderful dog. It was an honor and a privilege to be your mom. You brought happiness into my life and I learned about unconditional love because of you. You were the best dog ever.

For over a year we, the members of ARF, have been talking about how to attack the problem with the overpopulation of feral cats. Dogs are easier to catch, to sterilize, and to find homes for. Cats, however… well, for some reason cats are more difficult. It seems that you have to offer your firstborn in order to catch them, and we rarely can find a foster parent or, even less, a potential forever home. I, personally, love cats; but I think it is true what they say: you do not adopt a cat, the cat adopts you. Anyway, cats reproduce so much faster than dogs, so we knew we had to start doing something. We decided that the concept of TNR – Trap, Neuter, Return – was the starting point.

Volunteers and Dr. Cruz’ team assemble all the equpment for the mass sterilization.

During the weekend of June 8 and 9, 2019, we hired the services of Dr. Jose Armando Cruz to do ARF’s first feral cat mass sterilization, and over 100 females cats were spayed. I am not going to lie: this was not easy. By the end of Sunday, every bone in my body hurt, and I am pretty sure I was covered with all sorts of cats’ DNA.  Probably angry because I cheated on him, my own cat ignored me for the next few days (the dogs, however, loved it). But even if we felt like a train ran over us, we were happy to see the people of Rincon helping us.

One of the cars waiting for its turn to be sterilized.

We are thankful to the community who made this possible and to the people who understood that the situation of feral cats can only be solved if we all work together. During those two days people showed up with the cats from their neighborhood or we had to go and pick them up. But it was amazing to see the community stepping up, and for that we are immensely grateful. We also want to thank the volunteers from Hudson Valley Animal Rescue and Sanctuary who travel all the way to Puerto Rico to help us with our mission and to Dr. Cruz and his team, for believing in our organitzation. But most of all, we want to thank our supporters, especially everyone who attended our Saint Patrick’s Day fundraiser, as its proceeds went towards this mass sterilization. We are only hoping we could do more of these in the future. 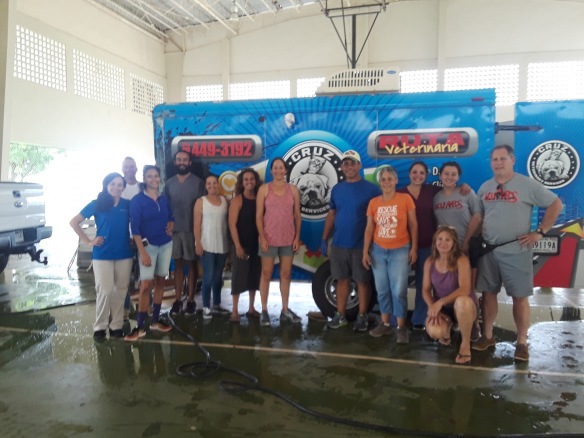 Dr. Cruz and his team, Hudson Valley Animal Rescue and Sanctuary, and ARF of Rincon.

I have a dog named Coco and he is a handsome, loving, and gentle chocolate labrador who steals the hearts of all my friends – many have fought for the right to keep Coco if something happens to me. It is very common to hear people say “I would love to have a dog like Coco.” Well, Coco was not so well behaved in the beginning.

Coco, the first day he arrived to the house.

Coco is the first dog I ever had; a neighbor brought it to me on December 31st, 2010. He was skinny and had scratches all over his body; Coco had been roaming this hotel for weeks and fighting with other dogs. That first night I left him inside the house (I didn’t have a fenced yard) because I was going to go to a New Year’s Party and when I came back he had “accidents” (both kinds) all over the house. So the first thing was to train him and put up a fence.

Then, one day as I am walking Coco on the beach he approached another dog in an aggressive way; someone suggested I should neuter him. So the next week Coco was neutered and we started working on his behavior towards other dogs. Other things that happened? Coco chewed furniture, destroyed dog beds, and knocked over the neighbor’s trash can and distributed all the trash evenly throughout his yard. One time he even managed to get in some stranger’s car. I put flyers all over town until someone said where they have seen my beloved Coco: he was drinking beers in the pool at the stranger’s house. 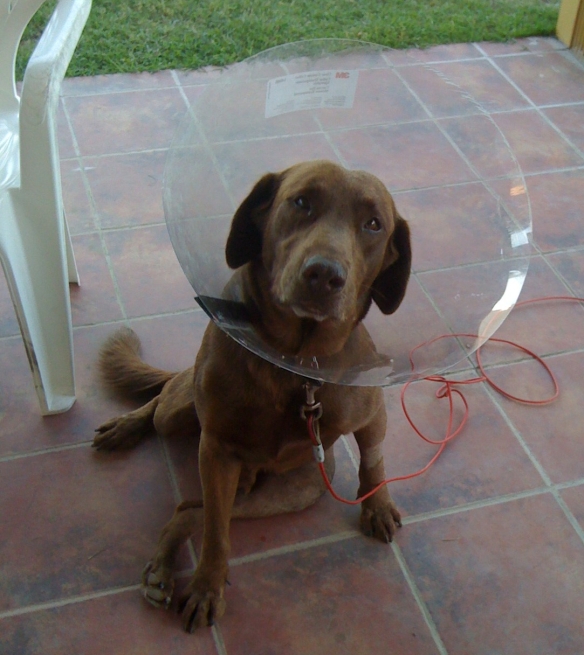 Coco wearing the cone of shame; spay and neuter are important to decrease the number of stray dogs and cats in Puerto Rico.

So how did this 80-plus-pound mischief turned into such an amazing dog? Love. And patience. And training. And more love. Coco helps me train all the fosters that come into my house; many of them fall in love with him and don’t leave his side. When I got Coco the veterinary told me he was between three and five years-old. So it is possible to train an adult dog. Many people want to adopt a puppy thinking that is the only way they can train them the way they want, but all my fosters have been adult dogs and, once they are treated with love, they end up being wonderful dogs.

Please consider adopting an adult dog. With patience and love, you may end up with a dog like Coco.

Coco has been a great help when it comes to foster other dogs.

Since I have been involved with ARF of Rincon, none of our dogs and cats (both our own as well as our fosters) have given birth. We are serious about spaying and neutering; we rescued a dog and first thing is vaccines and sterilization. Our own pets, as soon as they are 6-months old, is “SNIP-SNIP”. So we have been newborn-free for many years… Until this past weekend. 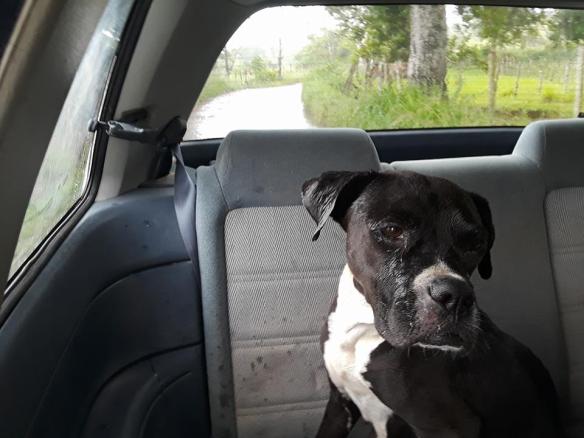 Miriam received a call that a pregnant boxer was dumped. In less than one hour she had taken the dog to a safe place and… Oh – was she pregnant. The dog was already looking for a place to give birth. Two days later the puppies arrived. We named the new mom Celia, in honor of Celia Cruz, a Cuban singer.

So now we have seven puppies. We have to wait until they are old enough so they can eat by themselves and have the first round of vaccines; then they will be ready for adoption. Name suggestions are welcome. And as soon as Celia finishes nursing them, is SNIP-SNIP time for her! 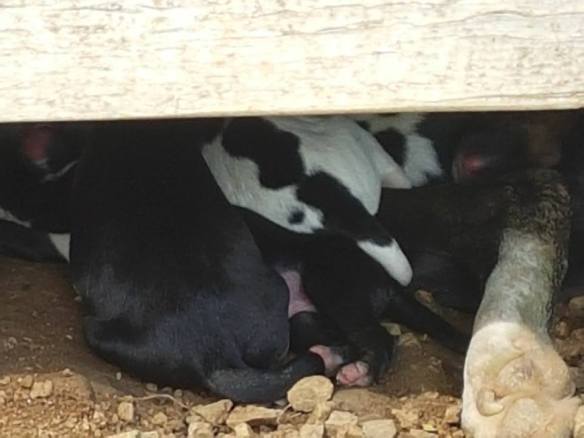 On March 14th ARF of Rincón celebrated its 20th St. Patrick’s Day Annual Fundraiser at Hotel Villa Cofresi. Joseph Montaperto a.k.a. DJ Mouse provided us with great music (thank you so much!) and the community of Rincón came and celebrated with us. We are grateful that we can count on your support. This year, we publicly thanked three people. First Jossie and Mike Freundel; this lovely couple never says no and are always willing to help us. They sell tickets like no one and are great at selling 50-50 raffle tickets. Second, Joanmarie Pondolfino, who has been participating since the first St. Patrick’s Day fundraiser (and we even changed the date of the event so she could go!).

Then, on May 20th, the owners of Mangia Mi Restaurant, organized a fundraiser for ARF of Rincón. There was a silent auction and a 50-50 raffle (won by Miriam Juan, who gave it all away). People enjoyed good food and Bruno (ARF’s poster child) was even allowed to eat some pizza!

We want to thank all of you who are involved, one way or another, with our mission. Thank you!

2017 was a particularly difficult year for ARF of Rincon. The damaged done by Hurricane Maria made it extremely hard to restore our personal homes as well as our work as volunteers. We close the year with the hopes that things will continue to get better.